2020 was a banner year for the markets for those who stuck it out the whole year. It wasn’t easy early on, but if you were invested in the S&P 500 start to finish you would have returned approximately 18% including dividends. And if you were lucky enough to own Tesla, Zoom or other top performers last year your returns were in the triple digits.

That’s nice, but did it matter? What percentage did your total wealth grow last year?

Make no mistake, 18% growth is well above average and should be celebrated. Picking up a big winner for the year can give you a nice boost too and get you excited about investing. But outsized returns are far more impactful when you already have significant wealth accumulated and invested. Early on your rate of savings, or the percentage of your income you can save, is probably the more important number. How about an example to illustrate what I mean.

George and Jerry work in neighboring cubicles from home in a good corporate job and both make $120,000/year. George’s lifestyle 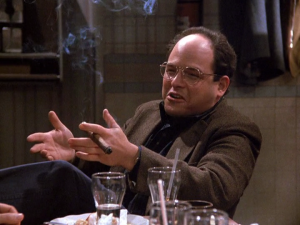 Do I have a stock tip for you! has crept up over time though, and while he has accumulated $50,000 in investments, credit card payments and car loan payments have left him without any extra cash to put away each month. The good news for George is that he has a secret investment strategy guaranteed to return 20% per year! However his rate of savings is 0%. On the other hand Jerry has been diligent about his savings and is able to put away 10% of his pay every month. Jerry has a far less exciting investment strategy though. He puts his money into a diversified portfolio which earns on average about 8% per year, which is a reasonable estimate, if even a bit low by historical measures.

What happens after year 1?

As we can see, even though George got the eye popping 20% return for the year. However, Jerry’s consistent savings plus his average returns led him to grow his invested wealth by substantially more dollars and by a higher percentage.

When George and Jerry are still building their wealth up, the amount they can save has a bigger impact on total wealth. In fact, George’s hot stock tip would have needed to return 33% just to keep pace with Jerry’s average portfolio returns plus his 10% rate of savings.

Of course, there is a point where the higher returns catch up. The power of compounding returns is real and it is what really accelerates our portfolios in later years. But how long does it actually take?

Look at the table below. George could continue to get 20% returns every single year, and it would still take him nearly 10 years to catch up with Jerry who took the disciplined, systematic approach of saving 10% a year into his diversified portfolio and averaged 8% return on the investments.

Once the portfolios get past this point, the higher returning portfolio really takes off. The level of investment risk to take on at that point is a topic for another day. In order to get to that point at all though, you must understand that in the beginning your rate of savings is more important than your rate of return.

Assumptions for Jerry: 10% of his $120,000 salary is saved at the end of each month ($1,000 per month) with an 8% annual rate of return used for all periods. In reality markets will vary from year to year for both investors and returns will fluctuate, including likely negative returns at times.

This content is developed from sources believed to be providing accurate information. It may not be used for the purpose of avoiding any federal tax penalties. Please consult legal or tax professionals for specific information regarding your individual situation. The opinions expressed and material provided are for general information, and should not be considered a solicitation for the purchase or sale of any security.